The story with Howdy is all about eye treatments.  Four times a day to be exact, so we are seeing a lot of each other.  This is pretty ok.  Oddly, I’m learning that he really doesn’t like to be handled from the right side.  I mean really objects to it, so you know what I am doing – handling him from the right side as much as possible.  I lead him from his paddock on the right side, I fuss over him on the right side and on an on.  Despite the daily treatments, the eye has not changed much and I admit I am getting a little frantic about wanting to see a positive change.  The steroids should help and it has only been 3 days.  I have faith, but I could use a little show for encouragement.  Here’s your daily eye picture:

I’ve been continuing to work Howdy in-hand and on the lunge.  Much work to the right.  It is coming along.

Meanwhile, Bravado, the other 5 year old OTTB went on his first hunt on Saturday.  (Technically hunt number 1.5 because he did one a few weeks ago but it was cut short due to baby horsie Bravado becoming a bit overstimulated.) Here is a picture of his ears on the hunt. Jay is the guy in red on the bay horse – and the bay horse is the magnificent Eddie: 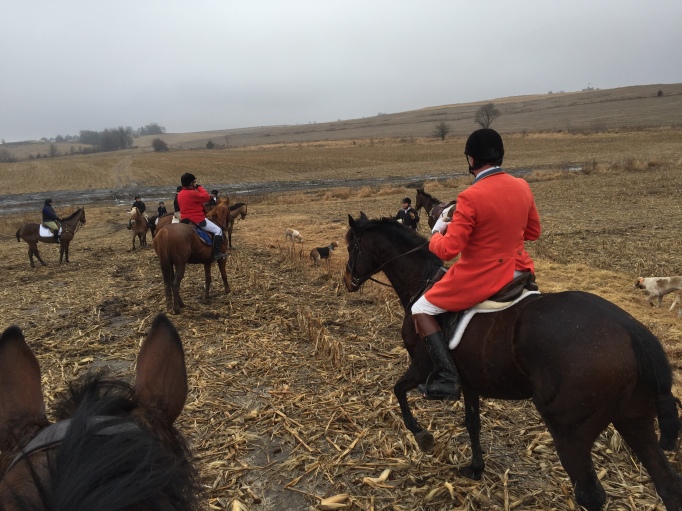 The fact that I was comfortable enough to be riding one-handed snapping a picture is an indication that things went pretty well.  That is not to say that there were not some exciting moments.  For instance, at the first real check, he was behaving beautifully, just standing and being relaxed – enough that I decided to have a beer from the whoopi wagon.  Apparently, I have never opened any sort of beverage while near him as he found the sound of the popping top quite alarming and sort of ballooned from a relaxed halt to a moderate canter in about 5 strides.  I had taken a glove off to pop the top, and now I had a loose glove, an open beer and the buckle end of the reins in my hands and the 17-hand OTTB was ramping to something close to a gallop, and the conditions on the wet gravel road were most decidedly fast.  So I ended up unceremoniously jettisoning the glove and the can in order to get my reins in order, and hopefully get him back.  This took a little while, so Bravado covered a good bit of ground on the gravel road before I had much influence.  He was pretty relaxed, he just happened to be cantering, of his own volition.  My friends were car following, parked at the check, and saw the whole thing and mused that it brought to mind the OJ Simplson car chase, “I think she is getting run away with.  Or is she?”  “I can’t tell, he’s sort of just cantering along…” 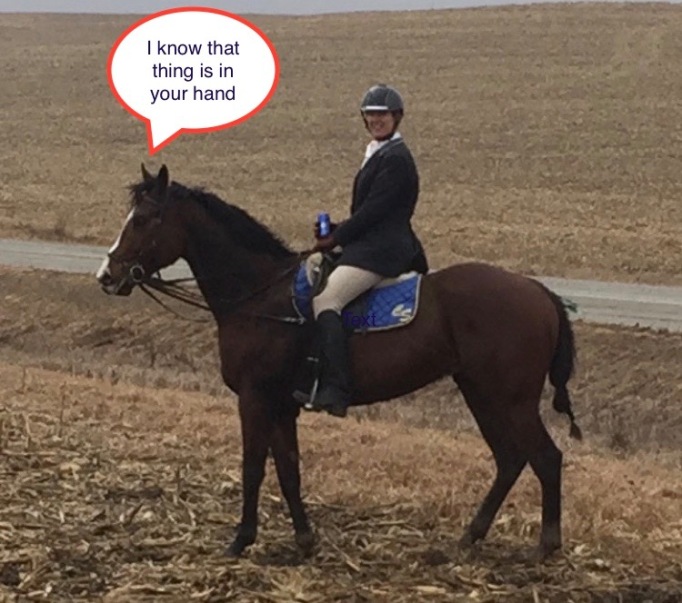 Thanks First Whip Bre Orsborn for the photo!

If you look closely at the picture, you can see the awesome sticky velcro strip on the top of my helmet.  I meant to wear the helmet cam, but the chance of rain argued victoriously against it.  The OJ Simpson Mini-bolt would have been great video.

On Sunday after I worked with Howdy, in-hand, I introduced Howdy and Bravado to each other, and the budding bromance came into bloom.  Not one squeal, and two minutes after I set them loose together they were mutually grooming each other’s withers.  It was darling.  You may want to light some candles and play some Barry White while you view the following pictures: 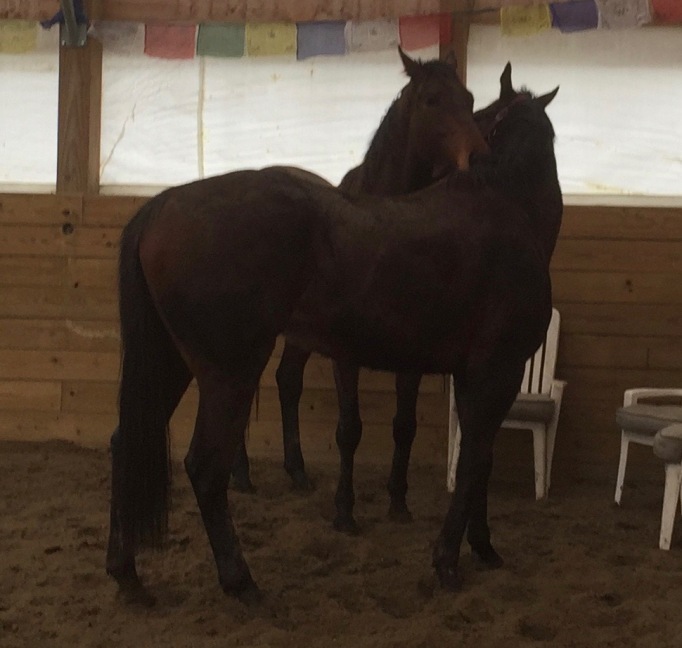 And then an afternoon of hay munching and sharing the run in.  Awwwww…