We interrupt the recount of the Horse Fair with a report of today’s events at the ISU Vet Hospital.  You may recall that when I went to look at Howdy on December 23rd, 2016, I noticed that he was holding his left eye just a little funny.  If you look closely at this picture, you can see that his eyelashes on his left eye are at a different angle from his right.  He is holding his left a bit closed. 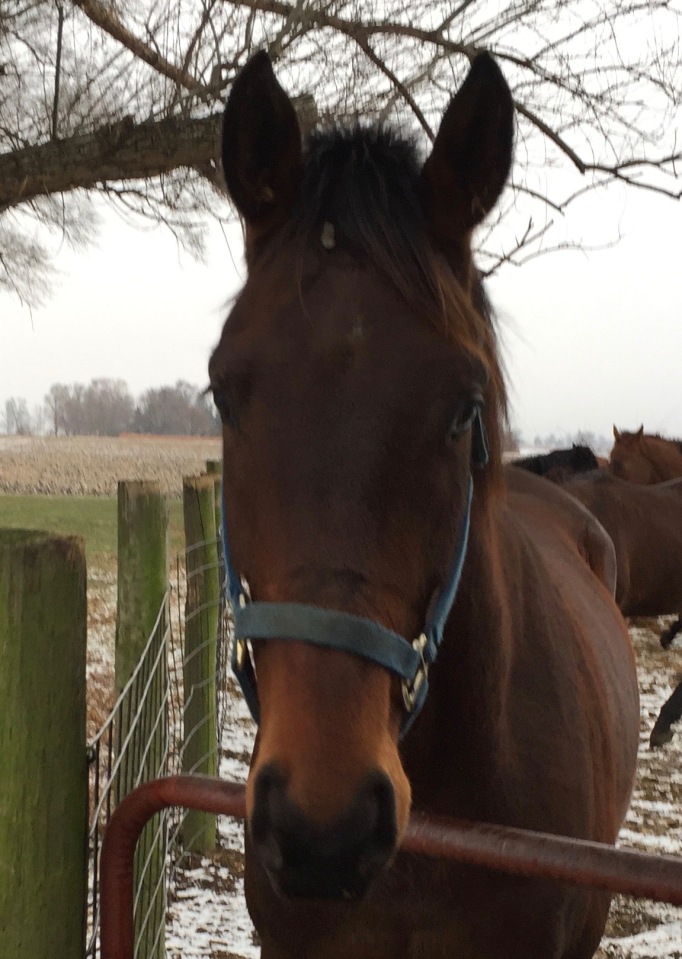 I was able to pick him up on January 8th, and by that time, his pupil had closed.

The part that is green in the picture above is supposed to be a large oval, like this:

This is a picture of his eye after his first visit to ISU Ophthalmology and treatment with a  lot of good drugs, including atropine to dilate that pupil.  Yay, we were on the right track by the second visit.  He had a few non-vision-affecting cataracts, but not a big concern.

Then I went in for the third ophthalmology appointment and the eye was worse again, though I could not tell by looking at it.  The cataracts were stable, but he had had “a flare,” and this time it included a little inflammation in the right eye too.  I started reading about Equine Recurrent Uveitis, though the doc had only mentioned it, not given it as a diagnosis.

The fourth checkup was today and since I could still see just a hint of inflammation in that left eye, I was pretty sure they were going to definitively diagnose him with ERU.

ERU is much more common in appaloosas than all other breeds combined, but it is not unheard of in tbs.  It just so happens that I had an appaloosa who had it when I was a 4-H-er and he went blind, despite my best teen-aged efforts at treating it.  The only treatments at that time were topical and keeping a mask on the horse.  I was pretty good with it, but it wasn’t enough and Johnnie went painfully blind by 20 years old.  I cried a lot over that.

So ERU scares me silly and makes me feel like that helpless teenager again, watching my good friend hurting and losing his sight with me only able to wring my hands.  And what I do when I am scared and a little torqued at the injustice of it all is RESEARCH.  Knowledge is power and research is what got me to the other side of My Journey Through MS.  If I did it once, I had a good shot to do it again.

Then I ran across this scholarly article that said ERU is not an autoimmune disease, it is an intraocular leptospirosis infection.  The research was done in Germany and those doctors recommend vitrectomy and replacement of the intraocular fluid with a gel.  Yikes.

But the leptospirosis idea made sense to me when I learned about cyclosporine implants deep in the eye.  These little beauties were developed at NC State University and have a pretty good track record for stopping or slowing the inflammation process.  Cyclosporin is effective at suppressing T-Lymphocytes, the most common infiltrating cell in the ERU eye.  So yay, that’s a very good potential tool.

The T-Lymphocytes apparently come from the gut.  There are some problems with the idea of the gut microbiota being involved in inflammation in the eye, the major of which is that the eye has a pretty good wall between it and the rest of the body that keeps things that are “other” out.  But then I ran across this article, which, unless you are pretty hardcore into science you might choose to skip.  But their premise is that some T cells from the huge number of microbials that live in the gut can, under special circumstances, acquire the key protein needed to cross the blood/retina barrier and then get in and cause inflammation in the eye.

So maybe a horse gets acute leptospirosis, recovers from it, but there are still some reservoirs of it in the gut that fester and occasionally from that reservoir some of these activated T-cells are let loose into the blood stream and they attack the eye.  That seems to be what all this is pointing to.

So that’s just what I am thinking as I lead Howdy into the stocks at ISU.  I am very dubious about my ideas because I am fully aware that I know just enough about it to be dangerous.  Vets are way more educated than me on these topics, so even though (and maybe because) I have my own thoughts on ERU, I am planning on doing a lot more listening than talking.  I put the horse in the stocks, tell them what meds he is on and how he’s been doing and literally step out of the room to let them loose to do their exam.

I got back before they were done and there was a pall over the room that wasn’t there when I left.

They tell me the inflammation in the left eye has improved but remains.  The right eye is inflammation-free. The cataracts have grown slightly.  They are not wanting to say ERU, so I asked them if this meant we had a diagnosis of ERU and they said yes.  Ok, say I, is there anything that can be done about it?  The first thing we talk about is cyclosporine implants, which I am not averse to.  In fact, I’m damned glad it is an option.  I’ve read that there are limiting factors regarding which horses it is recommended for, so I’m glad that is still on the table.  The cost is $2,500 for one eye, $3,500 for two.  Yes, yikes, but could be worse.  I’d have to give up some things for sure, but if it meant he doesn’t have to give up his eyesight, I can deal.  I’m very pleased this option exists, but not enamored of it because it feels to me like treating the symptoms rather than getting to the bottom of the disease.  Treating the symptoms is a Good Thing, absolutely, but addressing the cause is THE Thing.

I ask about whether we should do a blood draw for leptospirosis (yes) and ask a few more questions and I think for a bit about whether I should bring out the short, scientific articles I brought for them.  I decided that yes, if I was respectful, it was a reasonable thing to do.  So, I showed them the research I’ve come across and asked them what they think about going after the ERU with massive probiotics for a few months while I  monitor the progress with the help of the ophthalmologists.  They listen respectfully and are thoughtful and amenable to this and think it could be a sound course especially since it is early in the disease process and if it doesn’t work we have other options.  They also suggest that we could do a gentamicin injection into the eyes (yikes!) which has been shown to quiet ERU.  This I had not found in my googling. One of the problems with using the eye-injected gentamicin, they say, is that the process by which gentamicin works in this application is not known.  (Aside: which makes me wonder who was the first person who said, “Hey, let’s inject gentamicin into his eyes and see if it helps!”) Scientists and doctors aren’t ok with not knowing the basic science of why and how things work, but when I am considering my horse, I’m ok with not knowing how it works as long as it does.  Though I’m as curious as the next non-pro scientist, when it is your horse or your kid or your life, it isn’t how it works, it is that it works.

So we had a plan.  Then the docs tried to actually inject the gentamicin into his eye and Howdy was a ‘No’ about that.  Even under sedation.  The doc explained that the problem was probably that they had sedated him for exam and he came half out of it while we were talking, and then they put him back in sedation again and that just doesn’t work as well.  So we have an appointment next Tuesday to try again.

Meanwhile, I am sent home with a bunch of drugs again.  Every time I whine to myself about having to treat him again, I remind myself that I am dang lucky to have ISU with several ophthalmologists less than 15 minutes up the road and that the medications are nearly miraculous and that, with the benevolence of my husband Jay and giving up a few things here or there, we can afford them without too much trouble, for which I am also grateful. Plus Howdy is a very easy horse to treat.  Very sweet and relaxed.  He seems to know I am on his side even when I come at him with more stuff to put in his eyes.

So on to the probiotics!  The ISU ophthalmologists are going to talk to the internists about what they would recommend in the coming week.  Meanwhile, I’m like a dog with a bone on researching it.  And lookee here: I kid you not.  We’re starting with Bovine Colostrum.  It has more good stuff in it than you can shake a stick at, and cows are universal donors for colostrum.  By the way, the calves don’t suffer.  Cows make a LOT of colostrum, enough for two calves, and they usually only have one.  I read this article and I am convinced bovine colostrum can not hurt and should help.  I ordered six doses from Valley Vet and that should be here by Thursday.

And tonight he got his first dose of kefir mixed with molasses for palatability.  I mix it together and send it down his throat with a dosing syringe, like dewormer.  I make my own kefir, which is simple.  Contrary to common belief, you can feed kefir to horses even though adult horses are lactose intolerant.  The kefir grains consume effectively all the lactose, so it is not a problem.  Also, kefir contains Bacillus subtilis which has bactericidal action against the agents of leptospirosis, which happens to be exactly what we want.  And “lysis” is my new favorite word.  It means disintegration of a cell due to rupture of the cell wall, and that is what B. subtilis in suspension does to leptospirosis. 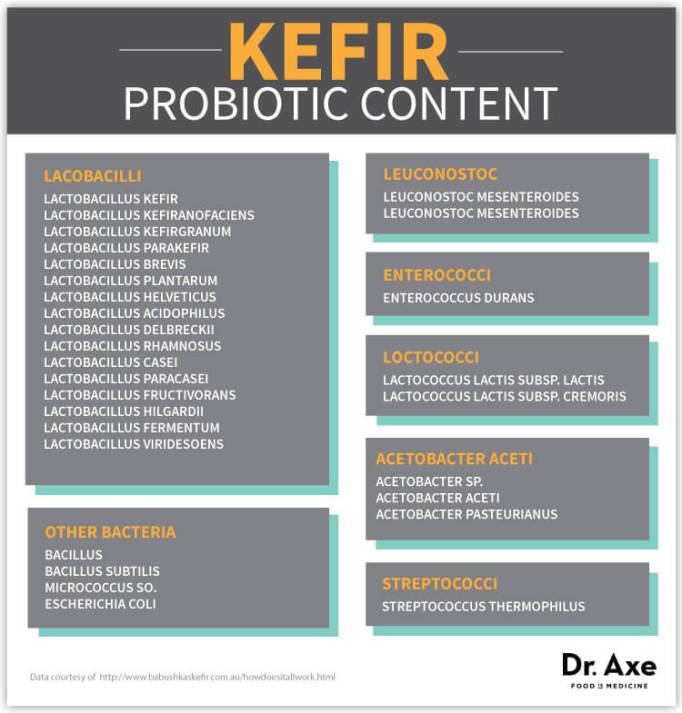