Impressive! I wonder what their sock drawer looks like.

We were on the road at 0315, which means that I was up and feeding at 0215.  Eddie ate a pretty decent breakfast, though all the horses were blinking their eyes and wondering what the early meal was about.  Eddie loaded on the trailer fine and we met our friends Chris Arnold and Sara Caruso about 45 minutes out.  They were blinking and wondering a bit too, but our plan was that we wanted to get through KC before rush hour, and we did.  Because of our early start, we were ravenously hungry by 10:00 and finally found a Taco Bell/KFC that was serving lunch.  Yay!  When we got condiments, we were treated to this magnificent display of OCD compulsion.  We wondered which of the employees was feeling much better now. 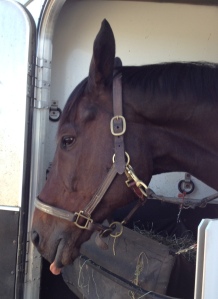 After 12 hours on the trailer our butts were getting tired and Eddie shared his thoughts on the long trailer ride.  Poor thing.  He had drunk a bit of water along the way and had a few cookies and ate some hay.  But when we arrived at the show grounds, he looked like this:

He cheered right up and settled in beautifully.  Despite the fact that we had offered him water on the trip, he immediately drank almost 3 gallons of water and started munching hay.  We let him rest and eat in the stall and it became clear that he was making up for lost eating time.  He had hay on the trailer, but apparently it is not the same.  He had bonked his right front leg on the trailer above his fetlock, and created a bruise despite the wraps, but he seemed supremely unbothered by it, so we let him rest while we walked the xc course.  More on that tomorrow.  We will walk it again then. 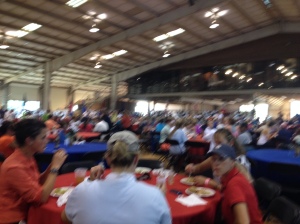 Then we went to the welcoming party, which was well-attended and nice.  They acknowledged all the sponsors.  Wow, that’s a lot of sponsors! and served a nice meal.

Afterwards I tacked up Eddie and went for a hack.  I don’t feel the need to drill dressage the day before, and I wanted to make sure I gave him time to stretch out and relax so we went for a hack up the gentle slope on one side of the park.  He felt great and it was nice to escape the hustle and bustle.  Then we worked in the ring for about 20 minutes.  It was almost dark, about 7:30, and the ring only had a few people in it, so it was quite relaxed.  Eddie did very well and is completely sound.  Afterward, I hosed the leg for about 10 minutes and it was much tighter than it was before I rode, which was excellent.

Everyone is in a very good mood here tonight and there is an anticipation atmosphere.  I ride dressage at 3:24 tomorrow, so will hack him a bit in the morning, then bathe and braid, take a break and then have at it in the afternoon.  Some time during the day I will walk the xc course twice.  We ride xc around noon on Friday.

5 thoughts on “Texas! And settling in.”