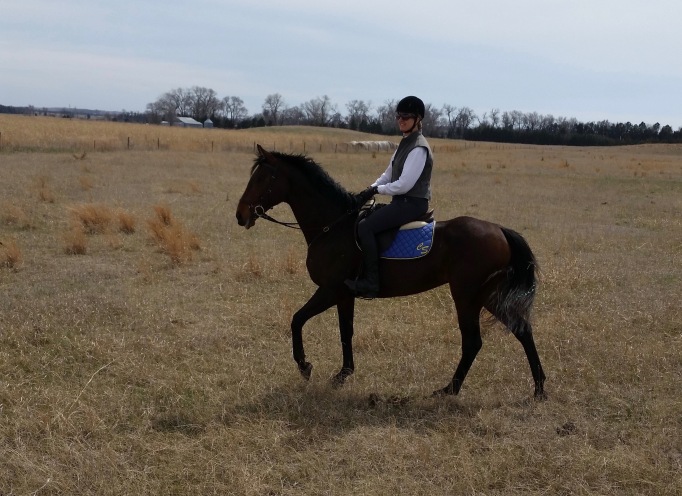 We pilgrimage to Burwell, Nebraska twice a year to pay homage at the alters of foxhunting, karaoke, cowboys and rodeo.  A strange combination to be sure, but there it is.  Howdy got to go along so that I could take him beagling on Friday.  Beagling is foxhunting’s much slower little sister.  We use “beagles” (ok, in our case various dogs who are interested in chasing rabbits) and they are easy to keep up with from horseback, so the pace for riders is much slower than foxhunting.  It is a great way to start young horses for eventual foxhunting and is a great introduction for future human foxhunters too.

Howdy got off the trailer, tied well, was polite for mounting and walked around flat-footed before the hunt.  This is not always the case with horses, so, Nice!

And for most of the beagle hunt, he was pretty good.  Managed not to buck, most of the time walked flat-footed when asked, and slowed down politely when asked. These are the hard things for foxhunters – going fast is easy.

Walking late in the hunt.  This is wonderful.  Doesn’t look like much, but it is everything for young foxhunters:

And some random shots of the hunt, including a marriage proposal between two of our hunt members!: 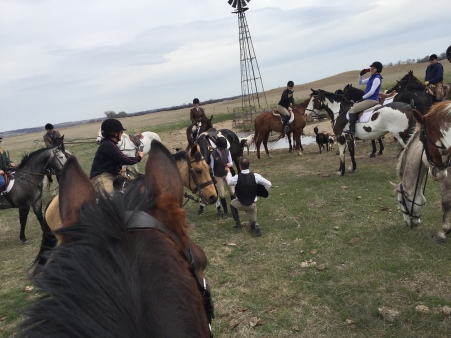 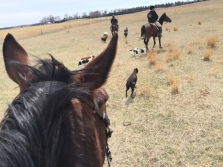 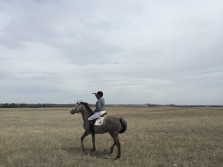 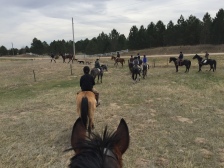 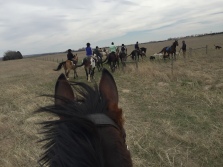 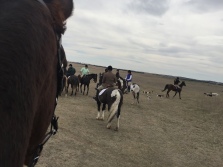 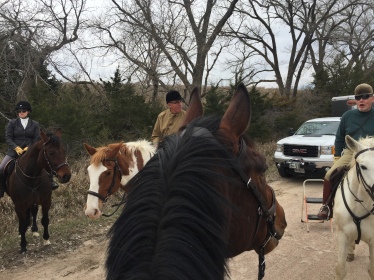 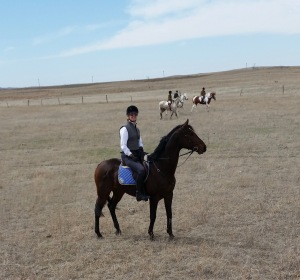 After we settled the horses back at the rodeo grounds, Jay and I went to Dry Creek (the tack store in town, which is nearly bigger than the grocery store) we bought a Guardsman mask for Howdy.  The Guardsman mask has a UPF of 25 which means that it lets in 1 of 25 units of the UV coming in.  That means this mask has 96% UV coverage.  I like its appearance much better than some other high-UV blocking masks too. 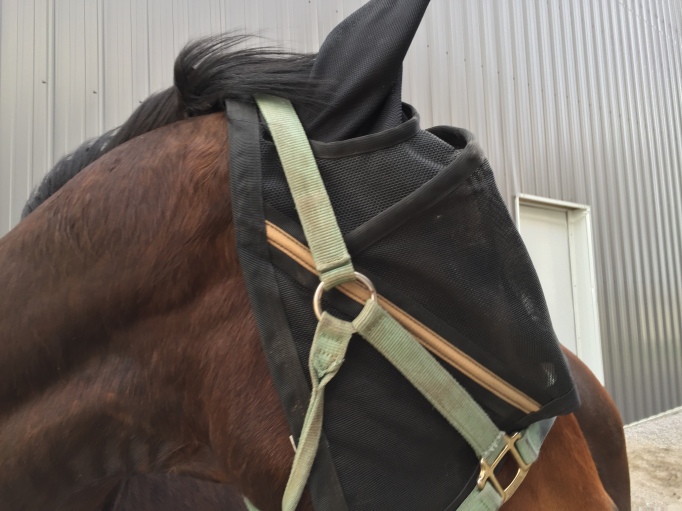 The next day I fox hunted with Bravado, who did really well.  In this cool helmet-cam video shot by my friend Kristen Welch, he is the tall bay with the white socks on the left in the beginning.  I dropped out of the video because I got worried about us being to close to the hounds.  I do not like scaring hounds by galloping near them with horses, let alone stepping on them.

When we got back from the hunt, I quickly tacked up Howdy to go for a hack with my friend Holly.  The footing on the sand roads is awesome for horses! 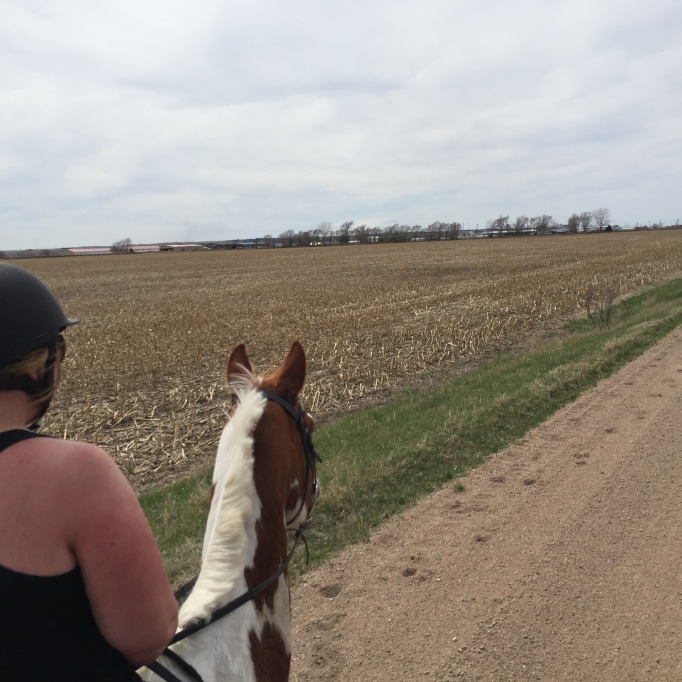 We came back and Howdy and I attempted 20 m circles in the rodeo arena.  As you can tell from our tracks, we have some consistency problems to work out, but he did really well.  We are fairly sure that we are the only ones ever to have attempted dressage in this arena, so we have that going for us. 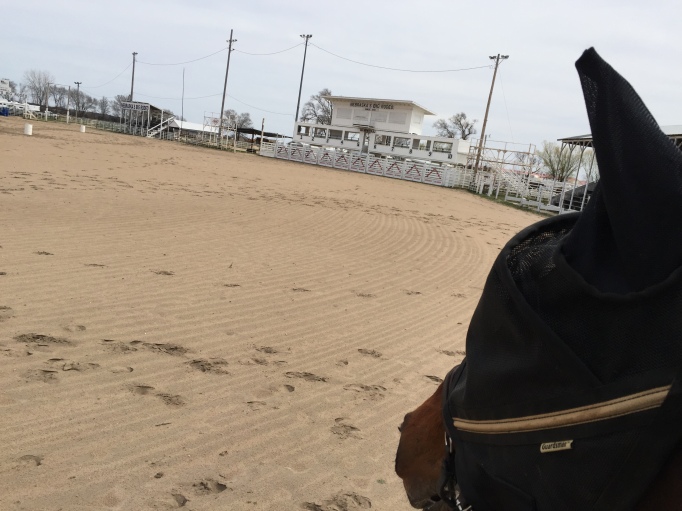 So, enough with the dressage girl antics – we decided to take a Cowgirl Queen canter around the outside of the arena.  I would have worked on my wave, but I had to hold the camera.  The bobble in the beginning is just operator error.  Howdy was great.

And then it was time to bid a fond farewell to Nebraska’s Big Rodeo grounds!  I’ll miss the October Burwell trip because we will be doing eventing and working ranch at the RRP! 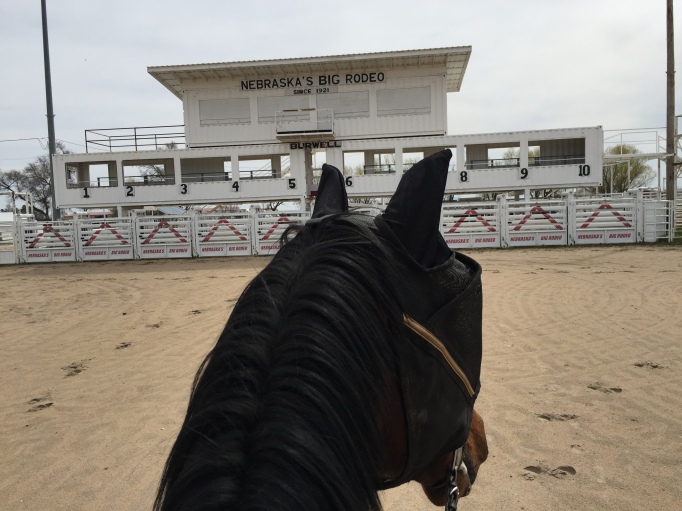