Earlier this week, I wrote the MS blog that I’ve been wanting to write for, oh, about five years.  After getting that out, I just sort of went into a writing stupor, and now, dear friends, I am back.

Howdy’s eye continues to improve and the thrice-daily (ooooh, getting Biblical!) treatments continue in earnest.  Though I have ridden him, I am spending a lot of time on lunging because he needs:

A little back story I got from his trainer at the track – they sent Howdy to a guy to break and condition him.  The guy was supposed to be galloping him under tack but it turns out that after he broke Howdy, he was just ponying him from another horse for conditioning.  When they raced Howdy, he didn’t have the under-tack fitness to do well and his owner said that it broke the horse’s heart to lose so badly to the other horses.  It was so profound to hear this gentleman say that – so dear to see how much he loved his racehorses.  He said Howdy never made him a dime, but that he also didn’t like to see the horse’s heart broken.  <sniff>

So now Howdy hasn’t had much success in his life, and I think that horses know when they are “successful” by human standards.  They read us better than we read each other. (Have you ever had a horse not like somebody that you thought was just fine and later you found out they were not?)  At any rate, if a horse hasn’t had much of a feeling of success around people, it may take a while to help them understand that the game is fun. 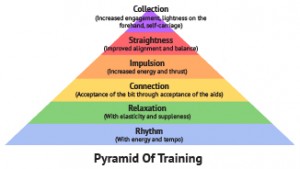 He skitters at a cluck and jumps in the air into a canter depart at a kiss.  Some horses just do this. I’m not blaming anybody, in fact, I don’t think it is all bad.  At least we have forward.  Alois Podhjasky would approve!  But we want him to go forward in relaxation.  Why look, that is near the bottom rung of the dressage training scale.

I have no problem spending the time to get him to settle and to learn that everything we are going to ask of him he can absolutely do.  It may seem like I have been just “chasing a horse around in circles,” doing eye treatments and paying vet, farrier, chiro and feed bills with this horse so far, and I suppose, objectively, that is true.  But just like it is winter forever until one day it is spring, all of this time and attention to detail will put things over the tipping point, and the sun will come out and the birds will sing.

He’s getting there.  Today was the first day he ate a cookie from my hand.  That’s a good sign.  And now he can do big circles to the right in a trot on the lunge.  He even cantered a few times today to the right on a right lead of his own accord.  Yay.

Tomorrow the chiropractor comes out to see if we can get him more comfortable going to the right.  I’ve had some good experiences with having horses adjusted.

These are my big silly Bravado ears

Meanwhile, two other items of note: Bravado did his second hunt on Sunday and represented himself pretty well most of the time.  There might have been a small anxiety rear once or twice, but he was much better at staying in trot when he should have been (horses new to hunting tend to want to canter rather than trot to get from point A to B, but honestly, most of hunting can be done quite well in trot) and he stood at checks pretty well.

And the other thing is that I found the coolest app and I hope it will be really helpful to me in my meal planning and execution.  Maybe you are looking for something like this too.  It is called  Mealime and basically it provides recipes and the corresponding shopping list for four meals at a time (you can also choose different numbers of meals, but four is what I chose).  Brilliant!  You can choose how many people you are cooking for, whether you want Traditional, Easy on the meat, Vegetarian or a couple of other options.  You can tell it what ingredients not to include in your recipes and you can sync your phone to the online app.

Not having to think every day about what is for supper?  Smashing.  Eating healthy without stressing over it?  Brilliant.  And absolutely horse-related.  Did I mention it is free?  Double bonus technical merit points from the West German judge*. A rider who is not worrying about what is for supper is a happier rider.  Nom, nom, nom.  🙂

*an obscure reference to ice-skating judging in the 70s.  Those West German judges were so cranky!