So tonight I spoke with a writer who will be interviewing several horse professionals concerning bits and foxhunting for an article in the Masters of Foxhounds beautiful publication, Covertside.  (Also on line as eCovertside).

Here are the notes I wrote up for her before we talked.  They are my thoughts on bitting and training horses and riders to do downward transitions in general.  They are in no particular order, but maybe you will find them interesting, useful or maybe a point to correct me on next time we meet.  Enjoy!

Horses stop because they were taught that they would get a release in their mouth when they react correctly with their feet. Bits don’t stop horses.  Training stops horses.

Putting on a bigger bit when your horse is not acting as you wish is exactly as effective as shouting more loudly to someone who speaks another language.

Many horses brace, tighten and run from mouth pain.  Then some riders think they need to turn up the bit severity and pull harder.  Then the horse pulls harder in response.  It becomes a spiral of increasing tension.  If you turn down the bit severity, and spend a little time acclimating the horse to the new contract of “rider is light in the reins, horse is light in the bridle” horses can become less defensive and subsequently hear a softer message more easily.  Often the answer is less bit and some rider help.

A kineton is another way to put a governor on bit pressure.  When the kineton was first introduced, people thought it must be harsh because even the hardest pullers and bracers would respond better to the bit.  It turns out the hardest pullers and bracers were the most sensitive and only pulling and bracing to protect their mouths.  When they didn’t have to protect themselves from their mouth pain (because the kineton did), the riders got better results.

If you are using a curb with a chain, you may have better effect if you switch to a leather curb strap or add a rubber channel over the chain.  If you insist on using a curb chain only, the thoughtful way to do it is to twist it so that the chain lies flat.  A horse has many nerves that run in the chin groove and the best effect elicited there is with a gentle aid.

A horse stops best by using his hind end.  When riders signal a stop or downward transition by opening their hip angle, closing their thigh and engaging their core before using their hands, the horse has a shot at producing a balanced and expedient transition. 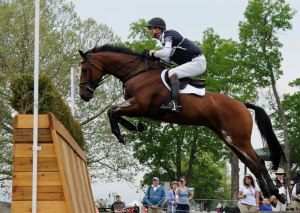 WFP smokin’ the ditch and wall and rockin’ the grab strap

Wearing a grab strap saves accidently water-skiing off a horses’s mouth when going up hill or at other times when balance may be at issue.  Pulling when you don’t mean to “wears out the brakes” just like over breaking in your car.  William Fox Pitt, who has won the Rolex Kentucky Three Day Event several times, wears a grab strap.

Halting using only your hands (which only activates the bit) will produce a horse that stops on its forehand, in a heap.  It feels like stopping a horse trailer with draft horses in it with only the truck brakes – the back end pushes the front and the stop takes longer.  Or think about stopping a bicycle using only the front brakes – the back end comes up, the front end goes down.  Brake too hard with the front only, and the back end comes over the front.  This is the opposite effect of what we want in a downward transition.  But, when a horse is allowed and encouraged to use his hind end to stop (by the rider opening her hip angle, closing her thigh and engaging her core and “stopping” herself before pulling on the reins) the transition feels like stopping a trailer when the trailer brakes are working perfectly, or like stopping a bike with the back brakes.  The back end stays down and the front end stays relatively up.  The transition feels, and indeed is, balanced, and is usually executed more quickly and with less fuss from the horse.