So the day started out with lessons down at Irish Run, which was great fun once again.  When I drove in the driveway in the early afternoon, I was greeted by these shining beauties: 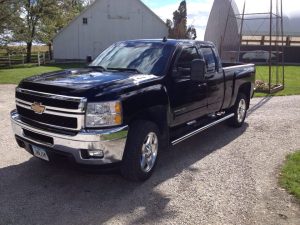 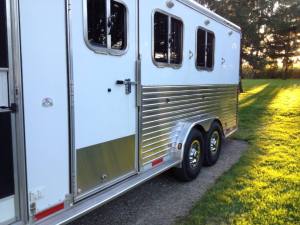 No, they aren’t brand new, but they sure look that way thanks to Jay’s elbow grease while I was away teaching.  One could surmise from this that Jay is fired up for Texas too!

We went for an afternoon hack, again because we are working on getting some more fitness on the foxhunting horses and on Jay’s riding muscles.  We went about 4 miles and did some practice on terraces.  Great fun for all. 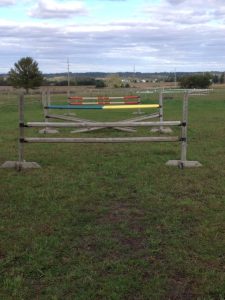 Then I set up a triple combination in the outdoor grass jumping field.  I haven’t jumped a triple in competition this year and I suspect they will have one at the ATCs, so I set up a 2 stride to a one stride with verticals at the ends and an oxer in the middle, that can be jumped either way, so that it would be a 2 stride to 1 or one to two.  Doubtful that they would have a one to one, but if they do, this is still good prep.  It is all about footwork. 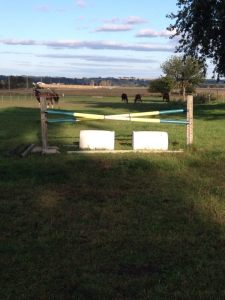 I rode in the late afternoon purposefully so that there would be some shadows.  I don’t know what time of day I’ll be riding in TX.  At regular horse trials, usually prelim goes very early in the day, so shadows are a factor.

After warmups over a cross rail and some verticals, Jay came out to help.  I told him what I was working on and he helped be my eyes on the ground.  Of course, he couldn’t let my simple stand-alone oxer just stand there in its boring oxer-ness, so he made it into a nice big Swedish oxer that sort of made me throw up in my mouth a little.  Thank goodness for the testosterone influence.  I’d rather be mildly freaking out on my own ground than in the warmup at a competition.  lol 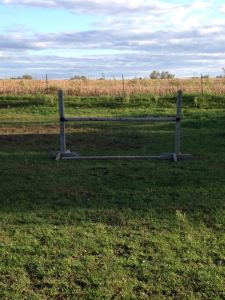 also made a horrid stand alone light to dark narrow vertical that should be worse than anything we’ll see in Texas.  It wasn’t quite as brutal as this pictures makes it look, but it was airy enough anyway.  And finally, the bending line Swedish oxer to the groundline-less vertical. 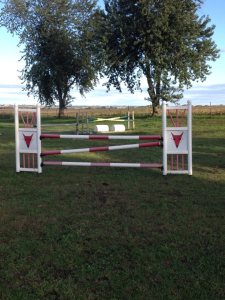 The jump school went very well.  With a few tweaks the rails were staying up and Eddie was happy with my riding.  Yay.  Interesting side note: the “jump” we have been searching for in our dressage canter showed up tonight in our showjumping school.  Double yay!  I bet I can bring that to dressage.  I have one last lesson with Trudy tomorrow, so we’ll see.

I took his studs out and put the stud kit in the trailer.  We won’t need the studs until xc day in TX now!

Then I came into the house and, while making supper, noticed a FB note from Donna Hammond that the COTH board had blown up with AEC/ATC competitors freaking out about a TX law that says that coggins papers have to be dated in the last 6 months for travel to competition in TX.  Nice of Donna to think of me!  The omnibus listing only requires one dated in the last 12 months.  I will wait until the morning to see if the organizer emails the competitors, because you can bet that her email inbox is going to be full of questions about it.  I sent one myself just to make sure that everybody didn’t think “oh, somebody else will do it”.  If I have to get a coggins drawn on Monday or Tuesday, it will be a hassle, but with Dr. Carly Ross and also the option of ISU, we probably can get it done, even if the results have to be emailed to us on the road to TX, so I’m not worried.

We ended the day by watching the WEG that had aired in the afternoon.  Some fantastic riding and they actually did a good job with eventing and showed very little reining.  (Hey, reining is fine with me, but if there is limited air time, I’m gonna vote for English sports).  But, in showjumping and the showjumping portion of eventing, one of the announcers could not get through his fool head that a rail down is four faults.  He kept saying, “There’s a fault” when a rail fell, and each time Melanie Smith, his co-announcer, would quietly work into conversation that it was 4 faults.  She was as tactful with him as she is in her fabulous riding.  Well done!

To close out the day, Duggie struck us a pose: 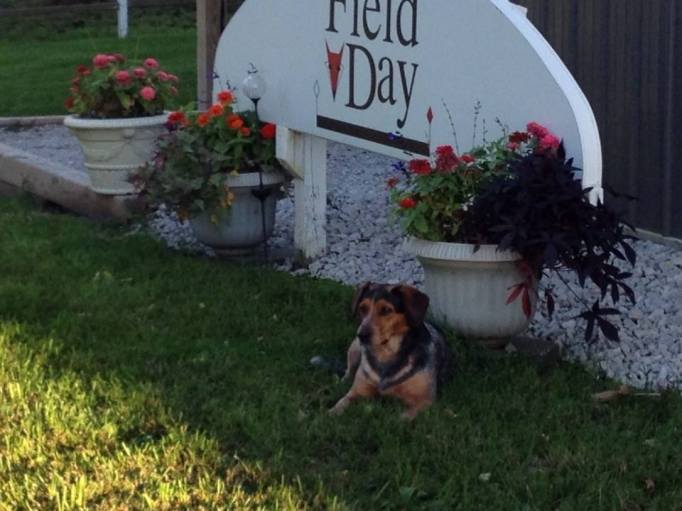