George Williams! How cool is that?

I just had a few minutes this morning before dressage started, to pop into the Maker’s Mark Bourbon Village for some breakfast (wow, that sounds like an introduction at an AA meeting, but they have unbelievable danish, I swear that was it).  I turned around after scoring a few of the little delicacies and said good morning to George Williams, USDF President and way good dressage rider.  He also, I learned firsthand, is a very nice guy too.

The rest of the day was full of fun surprises too, including Totillas’ and Edward Gal’s performance in dressage.  They are from the Netherlands, a country which slapped down some serious dressage at the WEG today and piaffed their happy hindquarters out of there with the gold.  The link above is not from today because frankly, ya’all are not paying me enough to tape grainy video on my brave little camera of this once-in-a-lifetime horse and thereby give up my chance to  totally enjoy it live from the fourth row .  Besides, we all know it will be bootlegged with some real quality cameras on Youtube within the week.  So, we’re all well-served.  But I will show you the one picture I took for you: 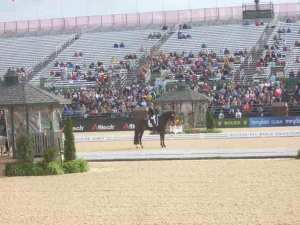 This horse even looks good just standing there.

The rest of the day was just as good as the start.  And tomorrow I will post the rest of the pictures and content, including lots of xc and a few combined driving pictures.  You’ll get a much better blog tomorrow than I would be able to do tonight in my current state of must-sleepness.